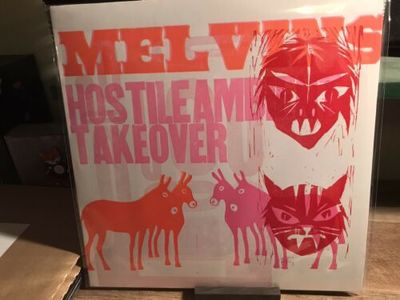 Talk about gilding the lily.

Remember when we released this as the sleeveless Halloween Edition to show off the artwork? Forget that jazz, because Mackie Osborne done printed up some special edition sleeves. Printed on an old 19th century letterpress where no 2 sleeves are exactly the same. Sleeves are signed & numbered on the back by King Buzzo himself.

Now some REAL important info here. The sleeves on this release are not perfect, not by a long shot. OK, they aren't horrible, either, but virtually all of them have some minor imperfections like a seam with a few smooth wiggly creases or a pushed in corner. That's par for the course & we wanted to let everyone know ahead of time what the deal was.

Now to the same ol' shit we already told you about when we released the factory edition...

Flashback to 2002, when Ipecac Recordings released a Melvins studio album called Hostile Ambient Takeover. The following year, they issued a series of 7" singles with the A-side from that record, but the B-side was an exclusive track of the Melvins take on various cover songs. Since then, people have wondered, "Yo Goober, is there gonna be a follow up LP with the B-'s?" It only took 17 years to answer that question, but yes, there is & it's called Hostile Ambient Besides.

The cover is designed by our very own HAZE XXL keeping up with the cheapo plastic mask theme of the singles with his take on the whole Nutty Mad/Weird-Ohs genre.

OK, so this is the Creepy Halloween Edition & is technically the factory one, like we've done before, but this one is oh so much more.It's a full-fledged picture disk & the first one since the Freak Puke release over 8 years ago. And there's more, it's double sided with both of HAZE's mask designs on it. Hot diggity damn!

Promise Me (The Gun Club)

Return of the Spiders (Alice Cooper)

White Punks on Dope (The Tubes)

Slight delay in the shipping supplies we ordered might result in a slight lag in mailing turnaround, so try to keep the undies from bunching.