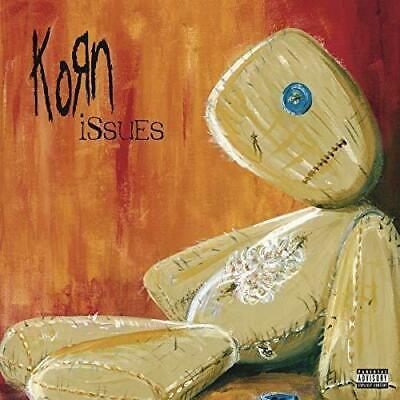 Double vinyl LP pressing. Issues is the fourth studio album by nu metal band Korn, released on November 16, 1999 through Immortal Records. The album was promoted throughout 2000 by the band's highly successful Sick and Twisted Tour. Korn formed in 1993. The band is known for starting the nu metal genre and making the genre become mainstream. Korn's influences include Alice in Chains, Pantera, Cypress Hill, Ice Cube, N.W.A, Rage Against the Machine, Sepultura, Geto Boys, Van Halen, the Pharcyde, Nine Inch Nails, Deftones, Dr. Dre, and Mr. Bungle. A lot of Korn's work has been inspired by hip hop music. Regarding their influences, bassist Fieldy stated "The Rolling Stones, Led Zeppelin - those bands haven't influenced us in any way. Nobody in the band ever listened to that stuff. Our musical history starts with the Red Hot Chili Peppers and early Faith No More. As a band, that's where we begin."

Resist Records will only accept returns within 30 days of receipt if the item arrives faulty or damaged, or if the wrong item is delivered.

If a defect is apparent with your purchase please contact us as soon as possible describing the nature of the defect and any additional relevant information regarding the purchase, including your purchase date. Once the product has been assessed we will inform you of our decision and the action we will take.

Preferred method of payment is paypal.

Resist is a retail store specialising in hardcore and punk music.