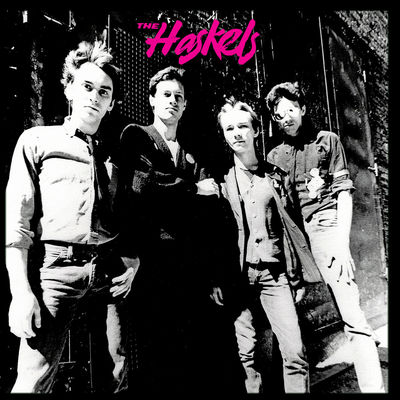 Hearing this artifact of the original Midwest first-wave punk era is akin to finding a treasure buried amongst shards of glass in the sands of time. Meticulously restored from the original, never-before-mixed master tapes, The Haskels lost studio album, recorded on one cold October day in 1979 at Milwaukee's  soon-to-close Solar Studios, should set the record straight on perhaps the most important lost gem of the era birthed from the Midwest, US, or otherwise worldwide.

Milwaukee's Haskels were kings of the late 70's punk scene, centered at Zak's North Avenue nightclub, sharing the stage with bands like the Lubricants, Blackholes, Orbits, Plasticland and others that have found their way onto bootlegs and posthumous releases of their own.

Their sound was a combination melded from the roots/glam/Detroit-inspired, naive retro pop sound of godfather/scenester Presley Haskel, and Richard LaValliere's surreal dream-based narrative genius compositions, fleshed out by Gerard LaValliere's precise guitar attack and Guy Hoffman's unorthodox but dance-inducing beats. The band's chops as well as their charisma carried the day, as they filled clubs and held court at the Haskel Hotel, their headquarters in the run-down Brady Street area of Milwaukee's lower East side.

The Haskels, evolved out of another popular pre-punk band of the time, In A Hot Coma, burned brightly from 1977 to 1979, supernova-ing after their last show together on New Year's Eve 1979. Presley and Gerard continued on to form the next version of the band, with Presley's Haskels releasing the classic "Taking The City By Storm" EP in 1981, while Richard and Guy went on to form the Oil Tasters, releasing two 45's and the acclaimed Oil Tasters self-titled LP on Thermidor Records in 1982. Guy later went on to drum for the BoDeans and ultimately, the Violent Femmes.

Meticulously restored from the original, never-before- mixed master tapes, The Haskels lost studio album, recorded on one cold October day in 1979 at Milwaukee's soon-to-close Solar Studios, should set the record straight on perhaps the most important lost gem of the era birthed from the Midwest, US, or otherwise worldwide.

All LPs include a two sided 12”x24” insert and a download card for a MP3 download of the LP plus five bonus tracks.

We gladly combine shipping for multiple item purchases. If you purchase multiple items, please wait for a corrected invoice.

-All records are shipped with the vinyl outside of the cover, except for sealed items. All vinyl is removed from printed inner sleeves and placed in a generic white paper inner sleeve. We will only open and separate sealed items at your request, otherwise, we will tight tape the four center edge points to reduce shifting. All records are well packed in record mailers with extra reinforcement/padding. All cassettes and CDs are sent in heavy cardboard mailers or in padded envelopes with plenty of cardboard protection. We take great care in packing.

-All U.S. packages are sent with delivery confirmation. We will ship Priority Mail or other methods at your request and expense. Just ask for rates.

Purchase is available if shipped through the eBay's Global Shipping Program