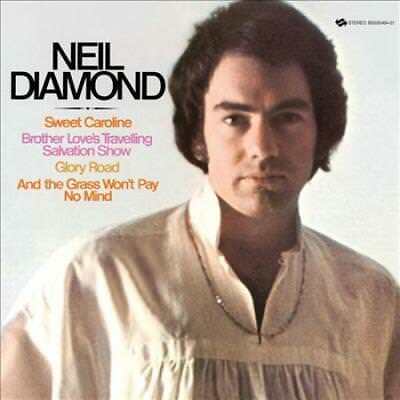 Product Description
Producers: Chips Moman, Neil Diamond, Tom Cataland, Tommy Cogsbill.
Also available with "Touching You, Touching Me" on 1 cassette.
This early Neil Diamond record offers a nice glimpse into the singer/songwriter's developing craft. Released in 1969 on the heels of his first Top 40 hit, "Brother Love's Traveling Salvation Show" (the lead-off track here), SWEET CAROLINE is somewhat rootsier than many of Diamond's later releases. Intimate, introspective ballads such as "Juliet" are placed alongside acoustic, R&B-flavored numbers like "Dig In" (which sounds like it might have been the result of an informal jam session), though the whole is unified by an understated, rhythmic mood.
By and large, SWEET CAROLINE bears the influence of the late-'60s folk-rock boom, with a focus on Diamond's songwriting, playing, and singing. Still, there is evidence of the dramatic flair that would characterize the artist's later work on cuts like "And the Grass Won't Pay No Mind" with its string-enhanced arrangements, backup vocals, and building crescendos. Country parody ("You're So Sweet, Horseflies Keep Hangin' Round Your Face") notwithstanding, one can hear Diamond developing his later persona here, especially on the dynamic "Brother Love's Traveling Salvation Show" and the title track (which was added to the album, along with its new title, at a later pressing).