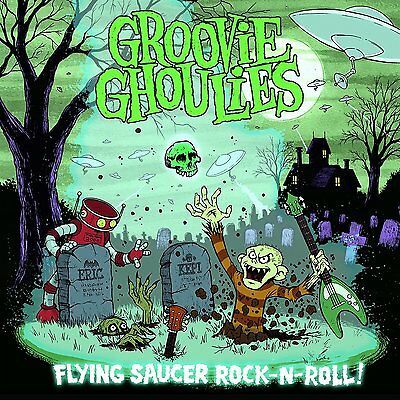 Positively praised by Maximum Rock n Roll's Tim Yohannan upon their original release, the first three 7”s from California's garage/punk legends the Groovie Ghoulies have been compiled for the first time ever on “Flying Saucer Rock N Roll.” Released to coincide with the group's 30th anniversary,this collection presents the first ten official songs the band ever released - on vinyl for the first time in over 25 years, and for the first time ever on compact disc! The tracks are newly transferred and re-mastered for digital release. In addition, the Green Door Recording Company vaults have turned up three primitive and rare studio bonus tracks, newly discovered and available for the first time ever in all three formats! They were originally dubbed and sold by the band in cassette format in the late 80's! "Flying Saucer Rock N Roll" captures all the early rawness and energy of the young and eager Kepi as he and his friend Eric just lay down tracks with a drum machine on a Tascam 4 track cassette recorder!!! No laws, no rules, just rock n roll! You can hear the presence of many of the bands that remained life-long influences on the band, from the obvious (Rolling Stones, Ramones) to the more sublime (Billy Bragg, Neil Diamond). These recordings are rare and historic, and mark the first of twelve planned releases which will result in a full catalog re-issue from this entertaining and enduring band. These releases will trace the evolution of Groovie Ghoulies, and this album is the first chapter in the story! A young Kepi Ghoulie, who didn't even have a full band line-up, felt so driven by the D.I.Y. punk and new wave movement, and the need to create his own brand of hi-energy rock n roll, that he recruited his friend to record his crazy vision like a rock n roll Ed Wood! And so away they went! That dream has not stopped to this day! 30 years and close to 20 full length records later, Kepi is still at it, writing, recording, and touring at a relentless and passionate pace.Thousands upon thousands of Groovie Ghoulies records have been sold over the years. Their songs have been placed in B-movies and snow and skateboard videos. The most random and unusual places: that is where you will find Kepi and his 'Ghoulie Family'.Let's relive the magic that provided part of the soundtrack to the lives of so many Southern Californians. It was a scene which grew into part of the East Bay Pop Punk sound, to Asian Man records and now on into the Burger Records generation! Hail Hail Flying Saucer Rock n Roll! Long may it rock, out into the Universe, second verse same as the first! We have been providing great bargins and quality merchandise on eBay since 1999. We always strive to provide our customers with the best online shopping experience possible. We use thick cardboard mailers specially designed for shipping records. As well we provide additional padding to make sure that your record will arive to you as minty fresh as possible. On the rare ocassion that there is something wrong with your order when you receive it please do not hesitate to contact us and we will fix it right away and make sure you are fully satisfied with your purchase. This record is brand new and unplayed. Check out my other auctions for tons of great albums and save on shipping! Only $2 shipping to add any other LP to your order within the USA.
Join Gripsweat!