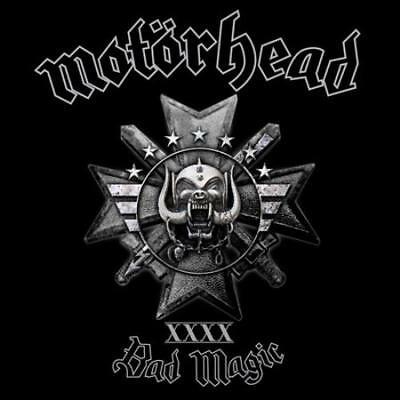 Product Description
A lot happened to Motörhead -- or more accurately to Motörhead's once and future leader, Lemmy Kilmister -- after the release of 2013's Aftershock, and most of it wasn't good. Lemmy, who along with Keith Richards seemed to be the rocker most likely to survive Armageddon (and why hasn't someone written a comedy where those two chat while foraging for liquor and cigarettes in the wake of World War III?), was abruptly revealed as all too mortal as he found himself struggling with heart trouble, diabetes, and other maladies, and more than a few fans blanched when they saw the widely circulated online video of a weakened Lemmy pacing off stage at the 2013 Wacken Open Air Festival, too frail to complete Motörhead's set. 2015's Bad Magic was the first Motörhead album after Lemmy cut back on liquor and tobacco (and had a defibrillator implanted), and returned to the road, and the truth is the mighty frontman sounds older and weaker for the ordeal. That said, it doesn't hurt as much as you might imagine; on Bad Magic, Lemmy sounds bloodied but unbowed, an ancient soldier who doesn't know the meaning of surrender and will happily run you through with a sword as he draws his last breath. If Lemmy croaks or wheezes more often on Bad Magic than he has before, it suits his tales of foul-minded bastards and their despicable deeds, and it's a fine fit with the bloody-minded attitude that has always been Motörhead's stock in trade. Just as importantly, Lemmy's bass work remains thunderous, as thick and dirty as it was in his salad days, and guitarist Phil Campbell and drummer Mikkey Dee continue to bring the noise in inspired fashion. Musically, this album brings very little that's new to the group's playbook, but they still sound like Motörhead, something thousands of younger and more agile bands simply cannot do, and if you're wondering if Motörhead can still kick your butt and blow out your speakers in 2015, the answers are "Hell yeah" and "You know it." And if the cover of "Sympathy for the Devil" seems an odd way to end this album, if anyone in metal can sound truly convincing as Old Scratch and oddly charming in his pursuit of evil, Lemmy's in the running, and Bad Magic suggests the man and his band might just be indestructible after all. ~ Mark Deming