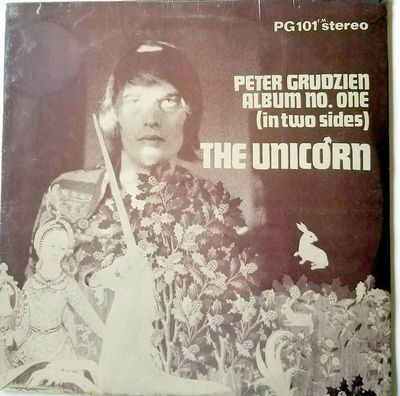 This is one of only 500 copies of the album custom-pressed and released in April 1974 by Peter Grudzien, who wrote and produced all of the songs and performed on all of the instruments. As indicated in the liner notes, quoted in their entirety below, he did this "to achieve complete control over what he wanted to say":
"An artist contemplates all forms of expression in an attempt to create new paths to communication.
Peter Grudzien, through his musical agility, has delved into the eternal question of love, its heavens and hells and it supernatural ability to cleanse and purify our souls.
Running through his work is the profound premise that has plagued humanity through all generations, who we all might be in the enigmatic process of life and what part love plays in that process?
Using the mythological creature of the unicorn as his constant theme Peter takes us on a pentecostal voyage restating the purity and soul saving virtues of this frail creature that will redeem mankind.
Because of Peter's ability to play all the instruments, write all the songs, arrange and record this album, he was able to achieve complete control over what he wanted to say, a luxury not afforded by many artists.
Peter's musical influences are: Peter Iljitch Tschaikovsky, Franz Liszt, Richard Wagner, Hank Williams, Johnny Cash and Bob Dylan."
(Notes by Marvin Pastina)

While the album is sealed, a small patch of shrink wrap on the back cover was torn away by the previous owner, and the note written there whited out (third photo).
Shipping is free in the U.S., and will be by priority mail. Shipping to other countries will be at the actual cost to ship to that country.